With a German father and a Turkish mother, Esra Rotthoff typifies the experience of the New German, and her constant explorations of themes of identity reflect that experience. Almanci is Turkish for “Turk born in Germany”, and with the Almanci series, Esra intended to give an iconography to a culture that never had one because of Islam forbidding images of sentient beings. It was a collaborative process with the Ballhaus Naunynstrasse, a post-immigrant theatre in Berlin, and broached the topic of mixed identity on the occasion of the 50th anniversary of the German-Turkish “special relationship”  - conceptualized by the theatre as a “marriage of convenience” between the two nations and cultures. The Almanci series provides a classic imagery of mixed cultures within the lens of the Turkish experience.

Esra’s work is consciously self-referential, building on repeated patterns and themes in an evolving conversation on identity and connection. Alongside this conversation, in all her work there is always a connection to theatre, to the theatrical staging of even everyday events in life. Here is Esra describing the process of shooting this iconic image of a woman holding a sacrificial lamb.

It´s a cold September morning in 2012 when this adventure with Shermin Langhoff and Sesede Terzyan happens. When we arrived at the farm in Brandenburg outside Berlin, I cannot believe what I see: a cherry tree in front of the slaughterhouse, a large rock, and an endless field. Jackpot. A man with a big bucket and the just-slaughtered lamb shows up: it gets serious. There is a lot of tension in Sesede’s face, the heavy lamb keeps falling down off her lap, but Shermin gets behind Sesede and helps her hold the lamb from the back while saying prayers in Turkish. The first flies come: I start photographing. Suddenly magic happens: the wind starts blowing her hair, the sun comes out for a second, I hear the holy sound of angels and we all feel, that the lamb’s soul left the body in the moment I made this shot. Immediately after, the animal turns cold. On the way back we all feel humbled by life. It’s a spiritual moment that I will never forget. 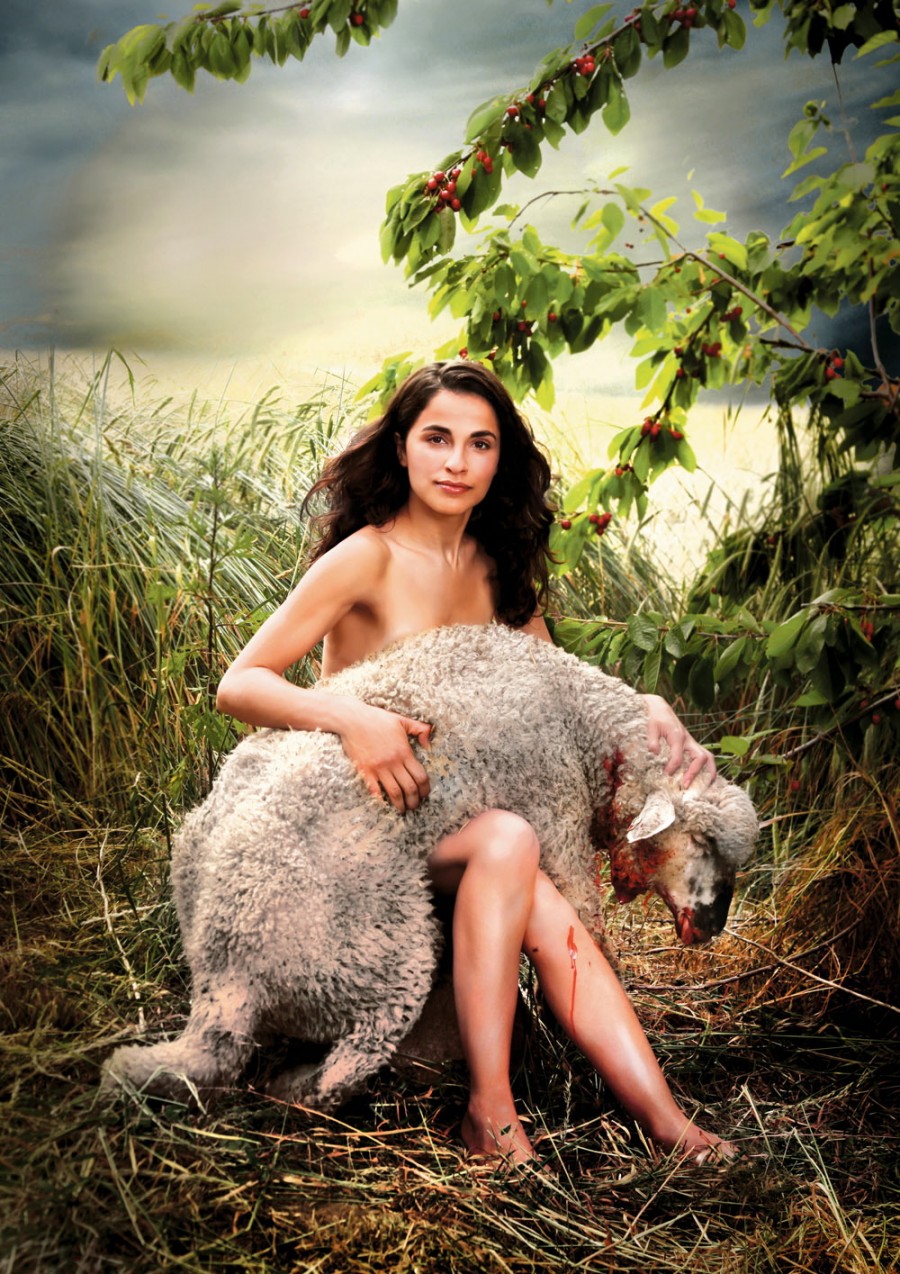 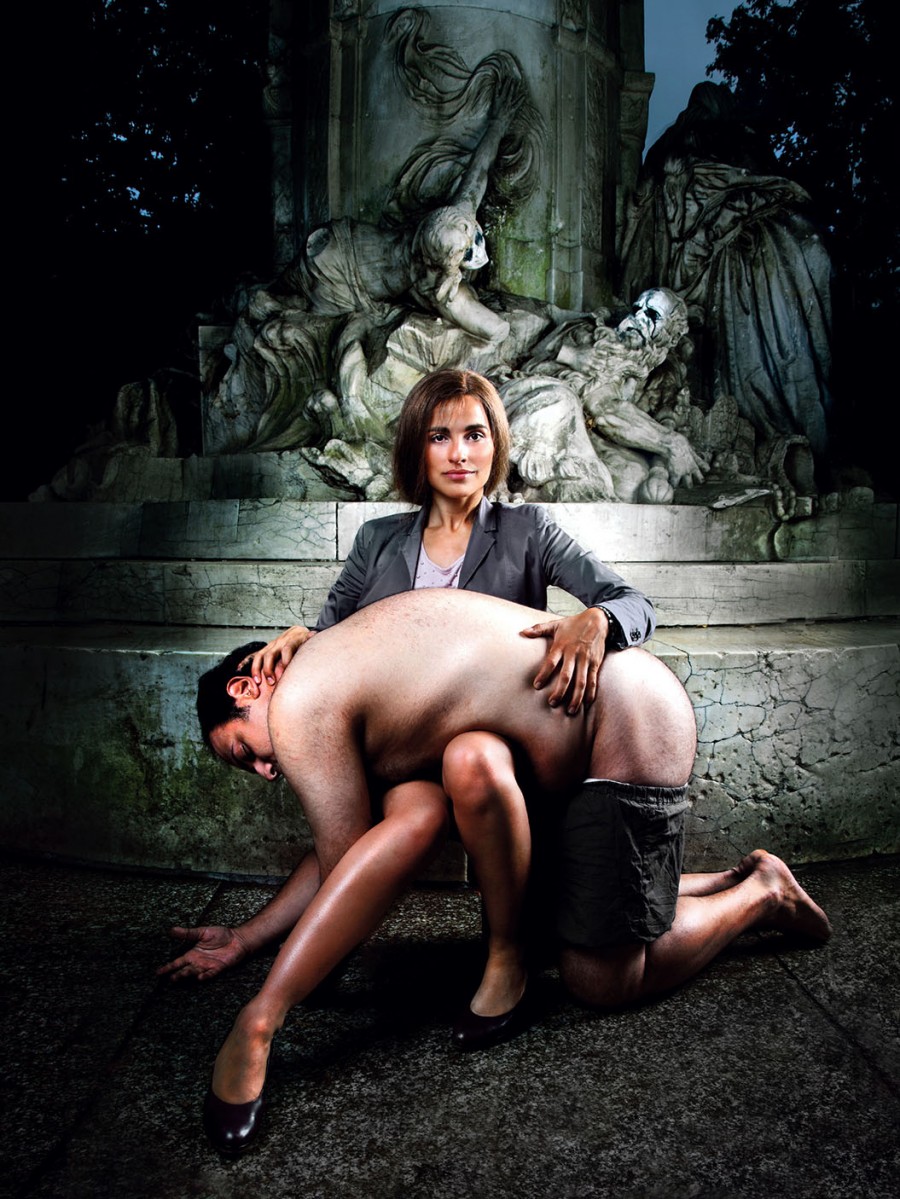 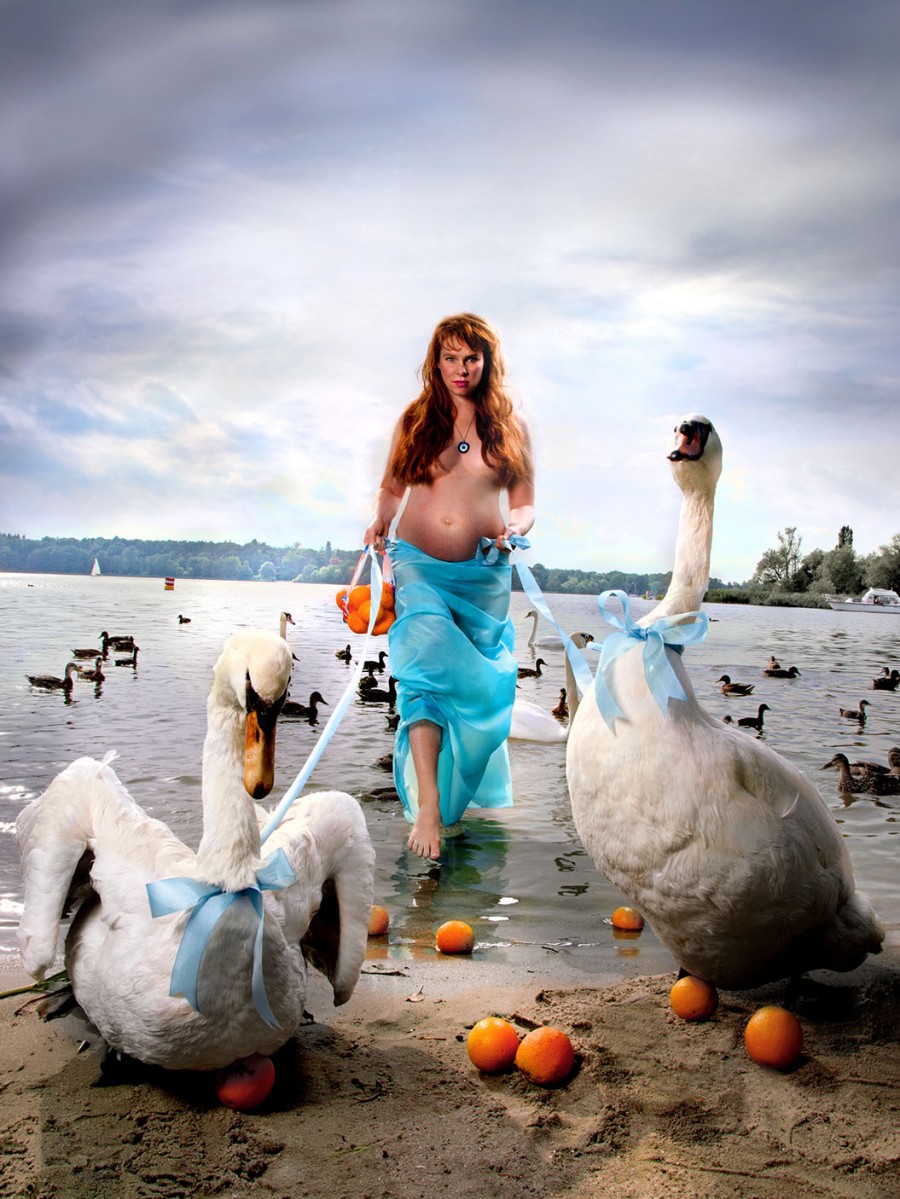 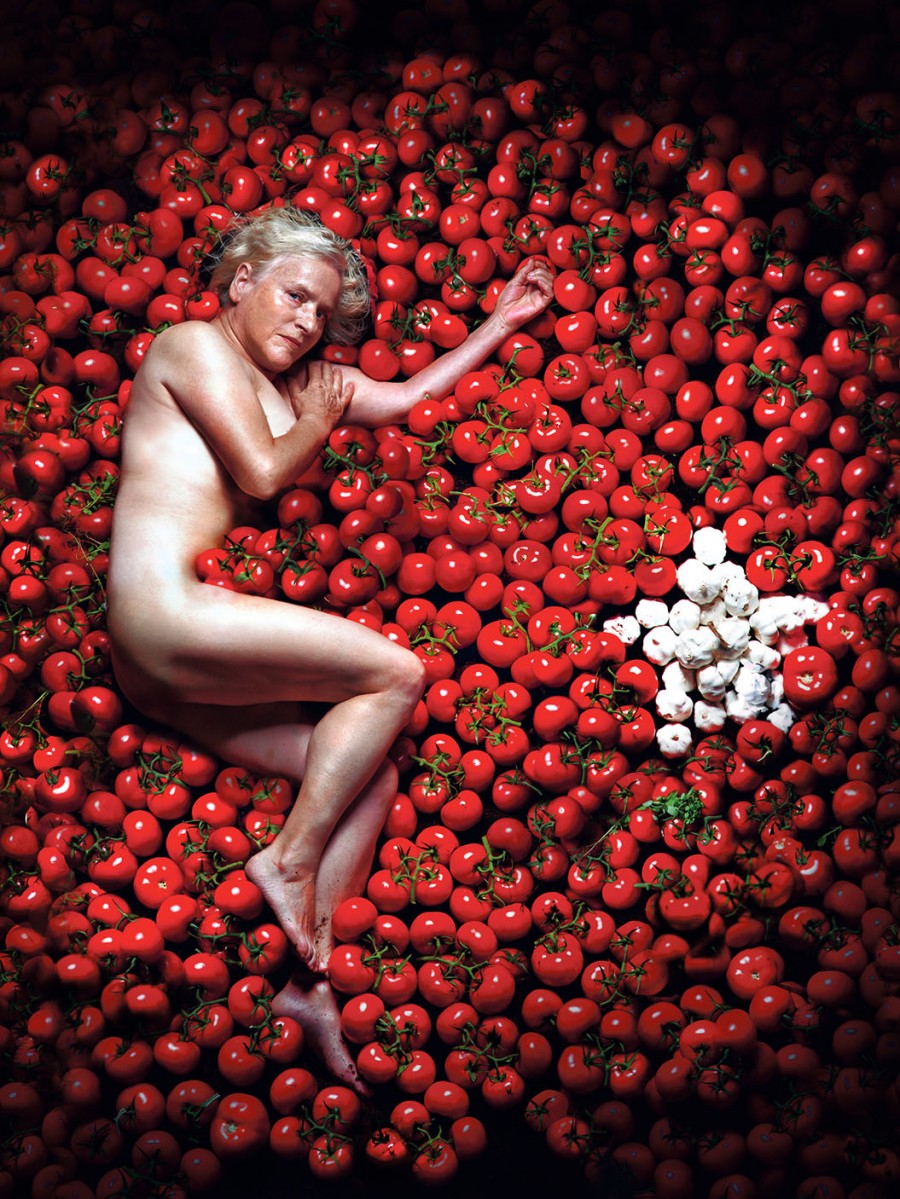 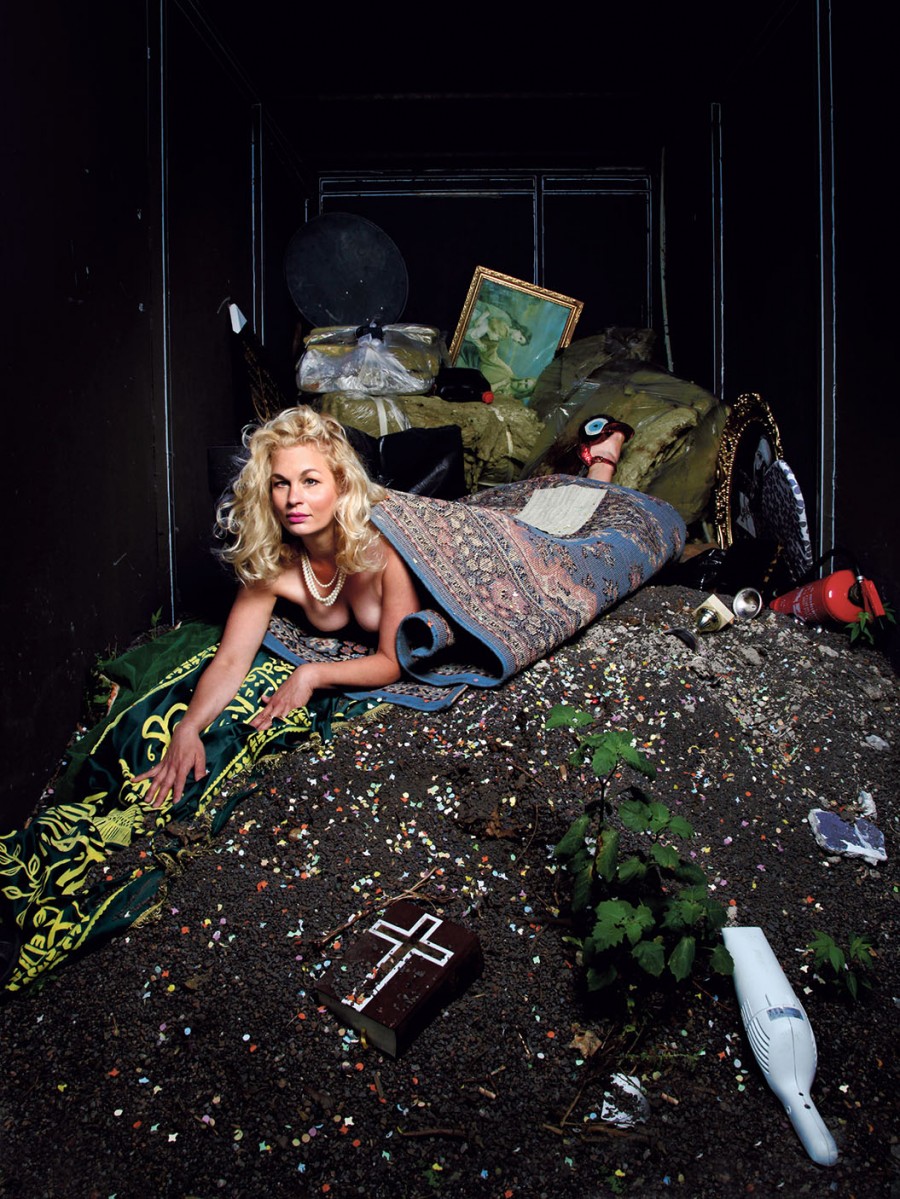 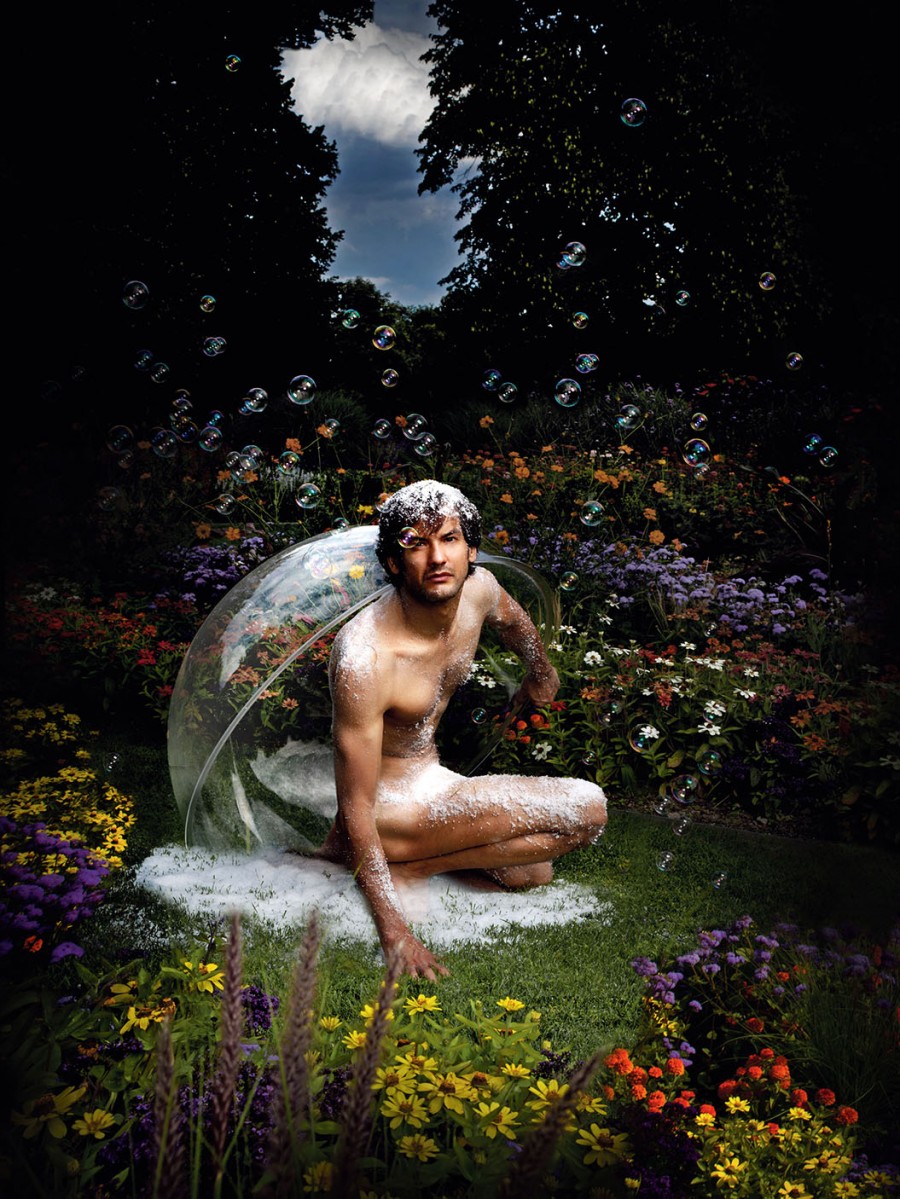 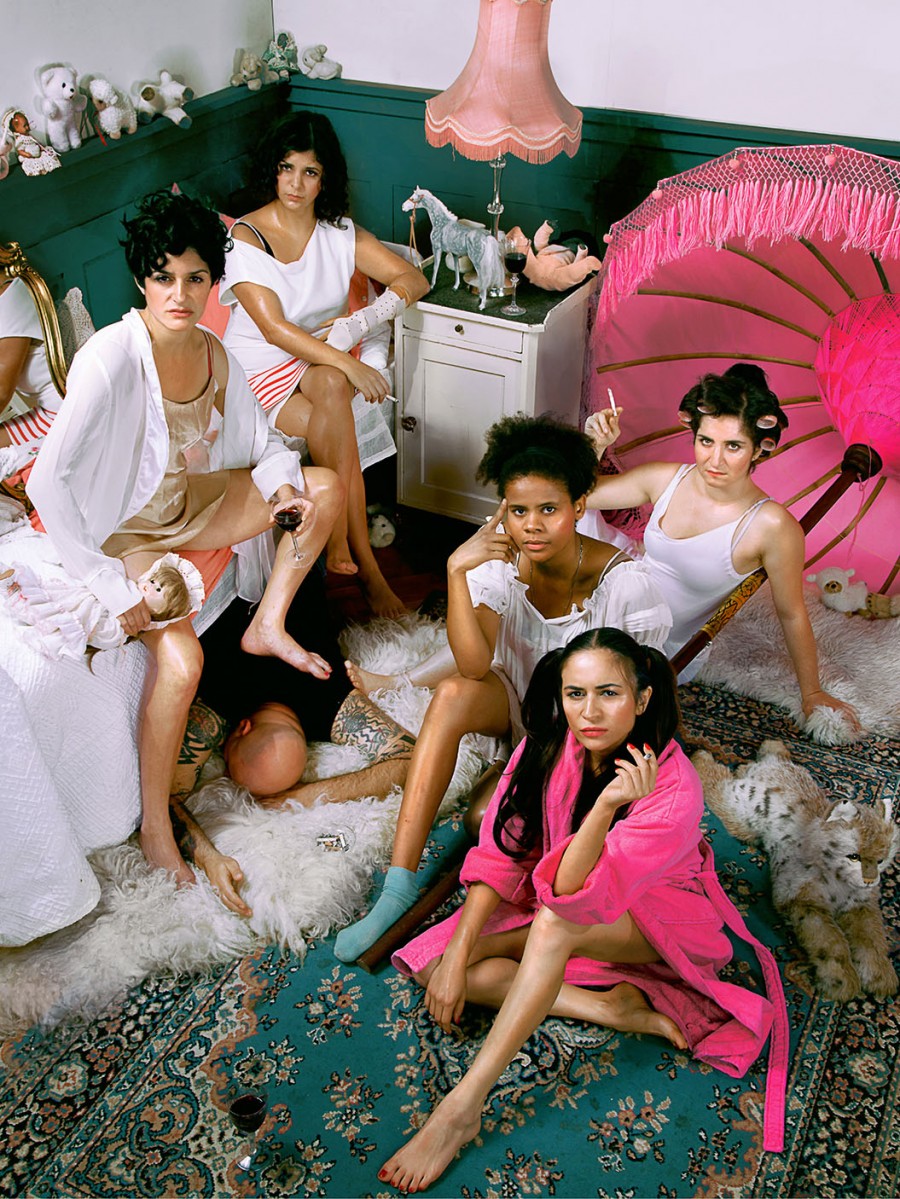 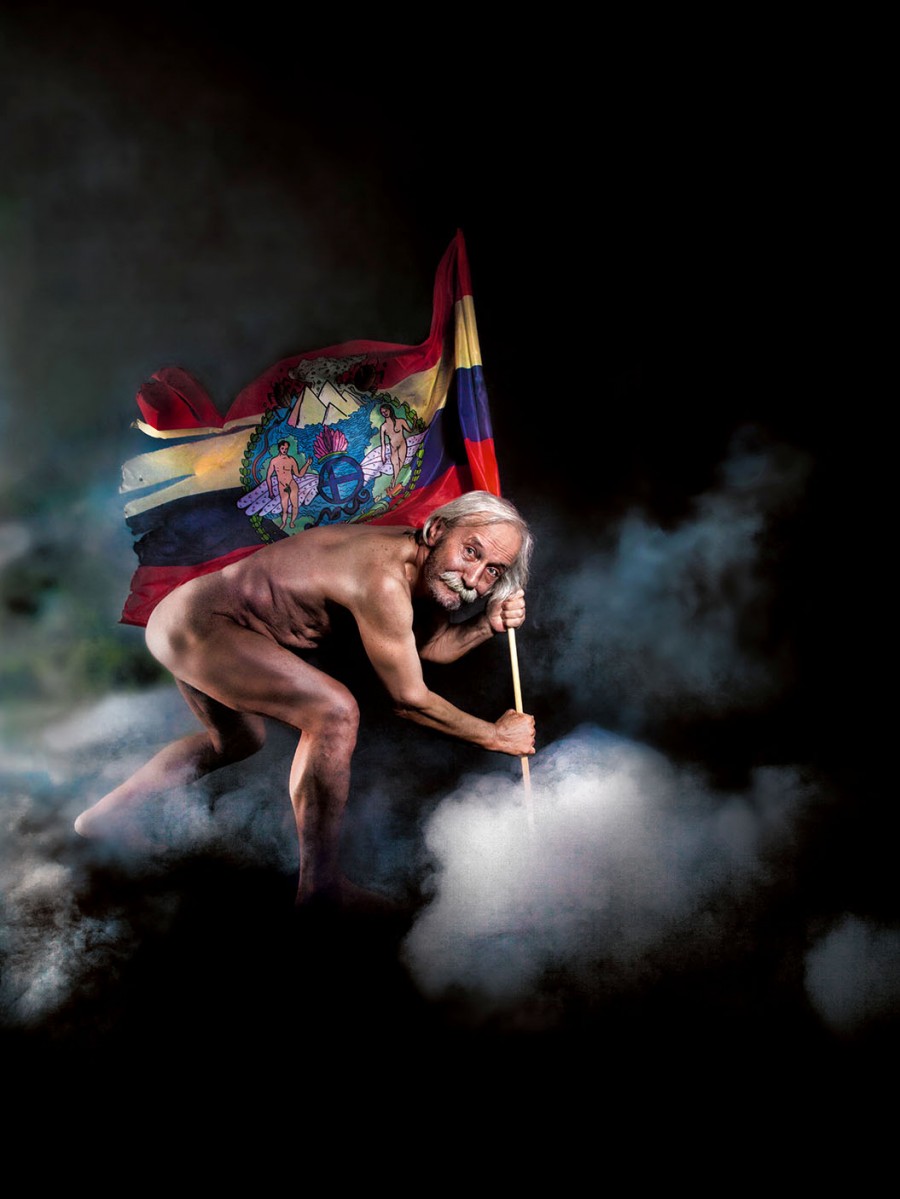 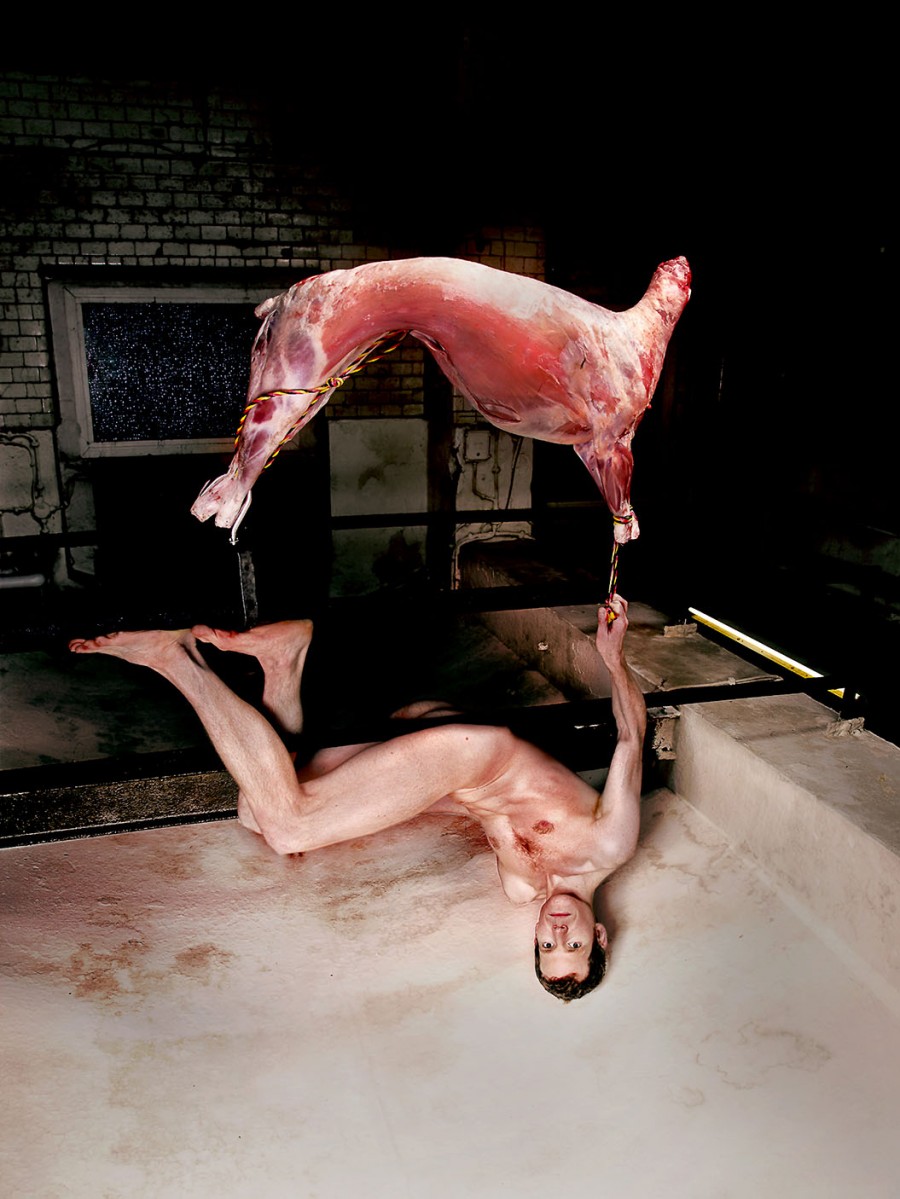 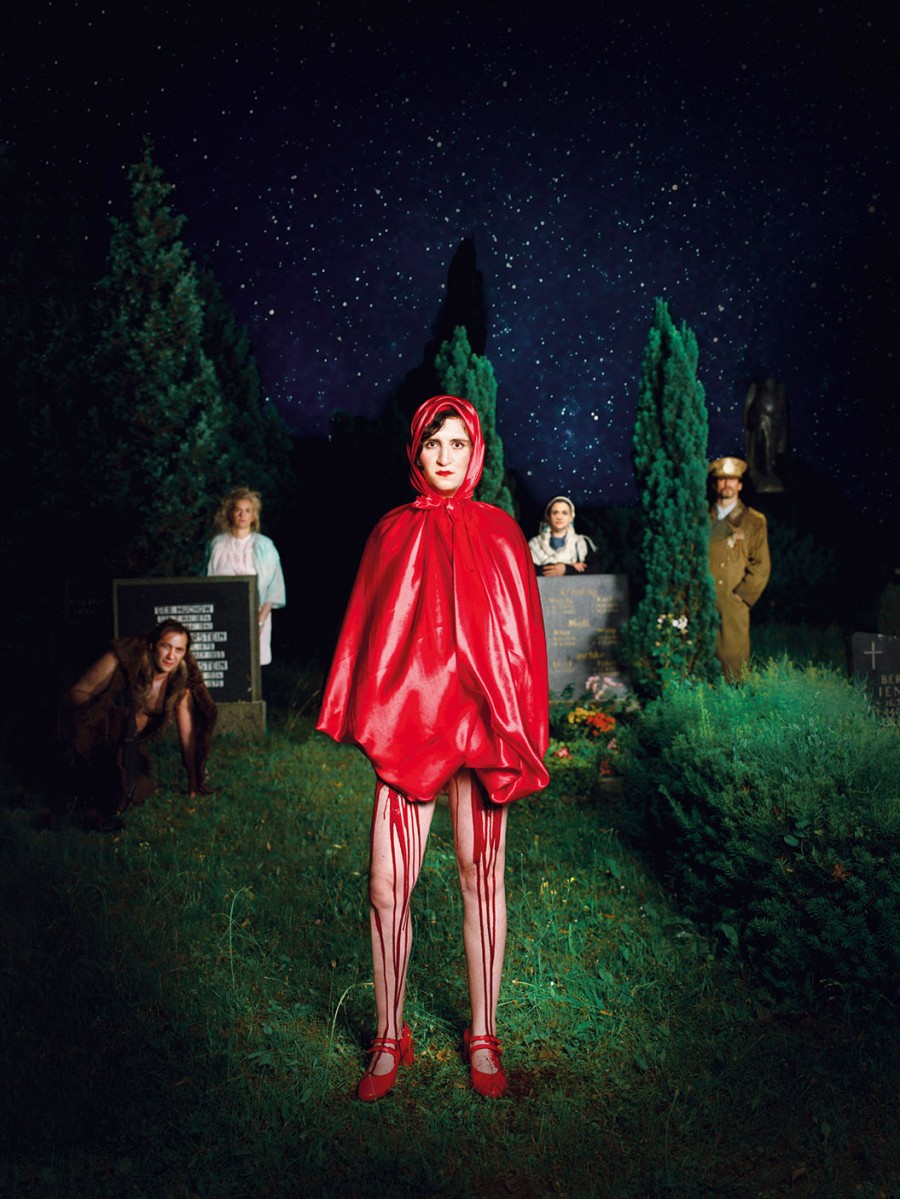 For the festival at Ballahus Naunynstrasse, Esra photographed Laila Soliman and Ruud Gielens as the main motive. A year of new beginnings and transitions resonates: In the Arabic region springtime has come and produces unforeseen blossoms. Movements like „Occupy“ demand social reorientation. Here and beyond the Mediterranean the stages vibrate with new rhythm. The festival „Voicing Resistance“ is going to present individual artistic voices that will tell about revolution, oppression, resistance and freedom.

Esra photographed Laila and Ruud in Brussels. When she flew in, with two dead birds in the hand luggage she didn´t know, Laila fears birds. Anyhow, they managed to take these shots. 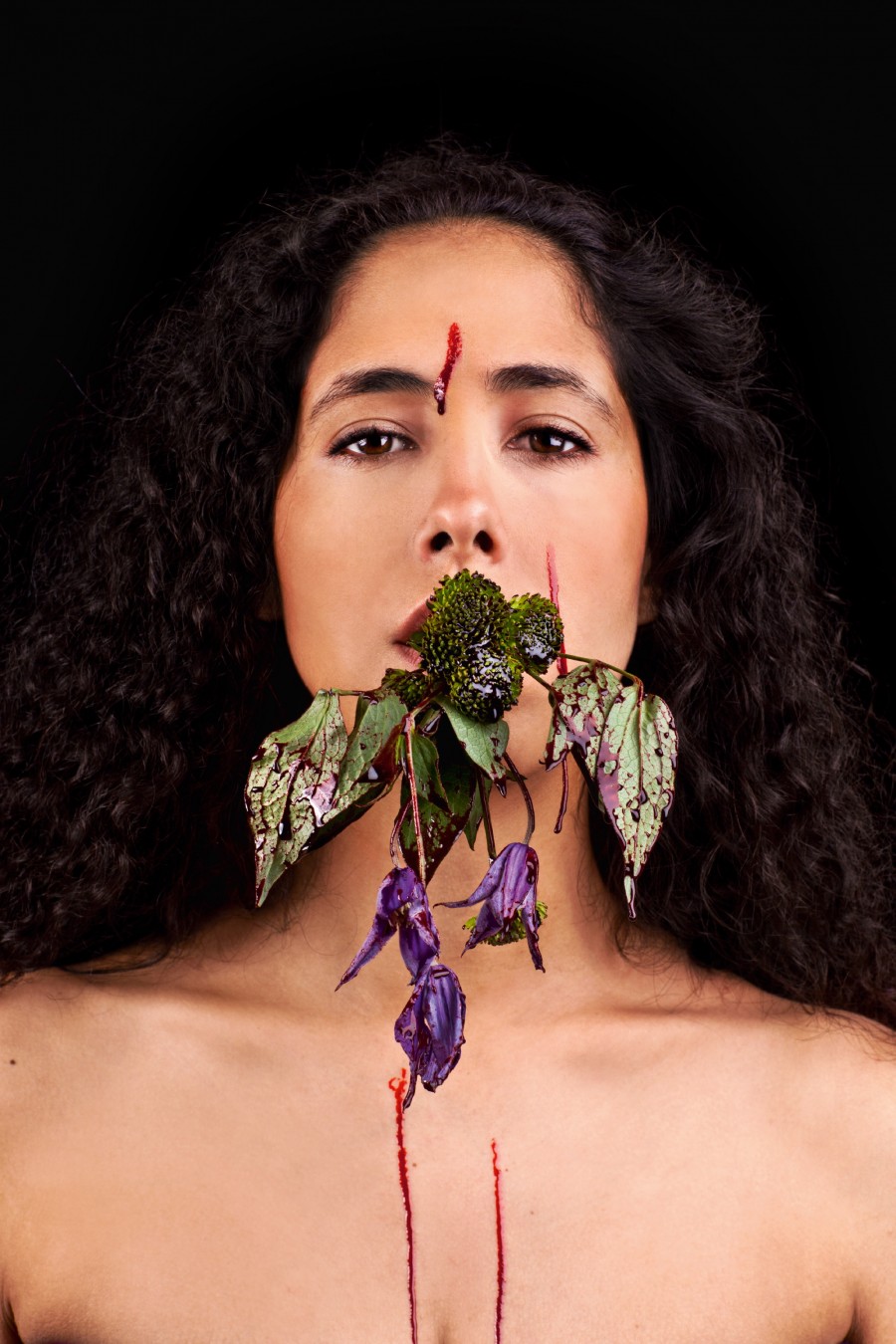 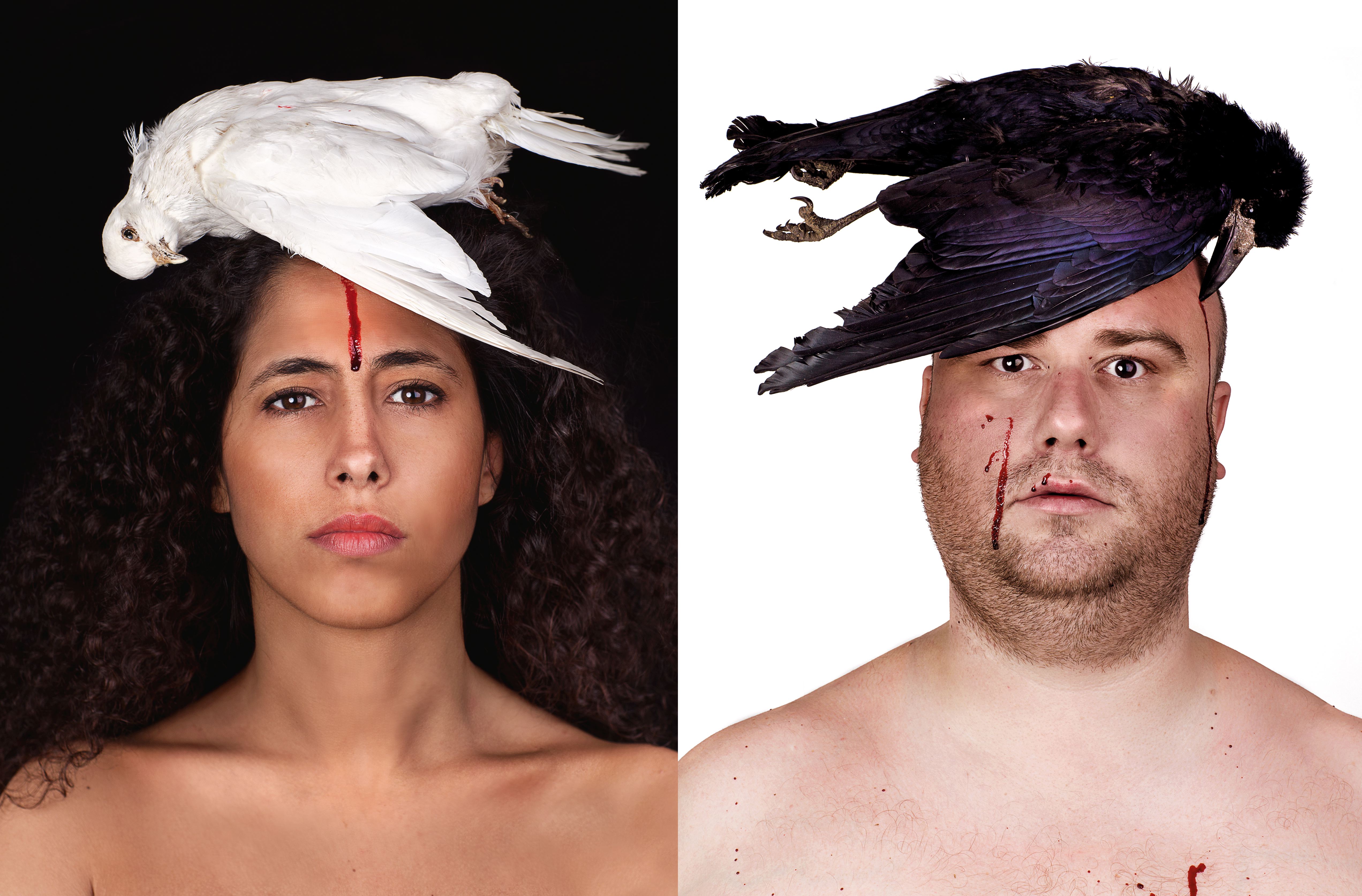 The armenian-turkish journalist and writer Hrant Dink was jailed 206 for 6 month because of §301, that forbids offending the turks. After attending at a political talkshow, he got assassinated in january 2007. five years later, based on the talkshow the artist Züli Aladağ, Mıraz Bezar, Silvina Der-Meguerditchian, Hans-Werner Kroesinger and Hakan Savaş Mican, are working on a performative reflection with asking questions about nationalism, publicity and freedom of opinion. 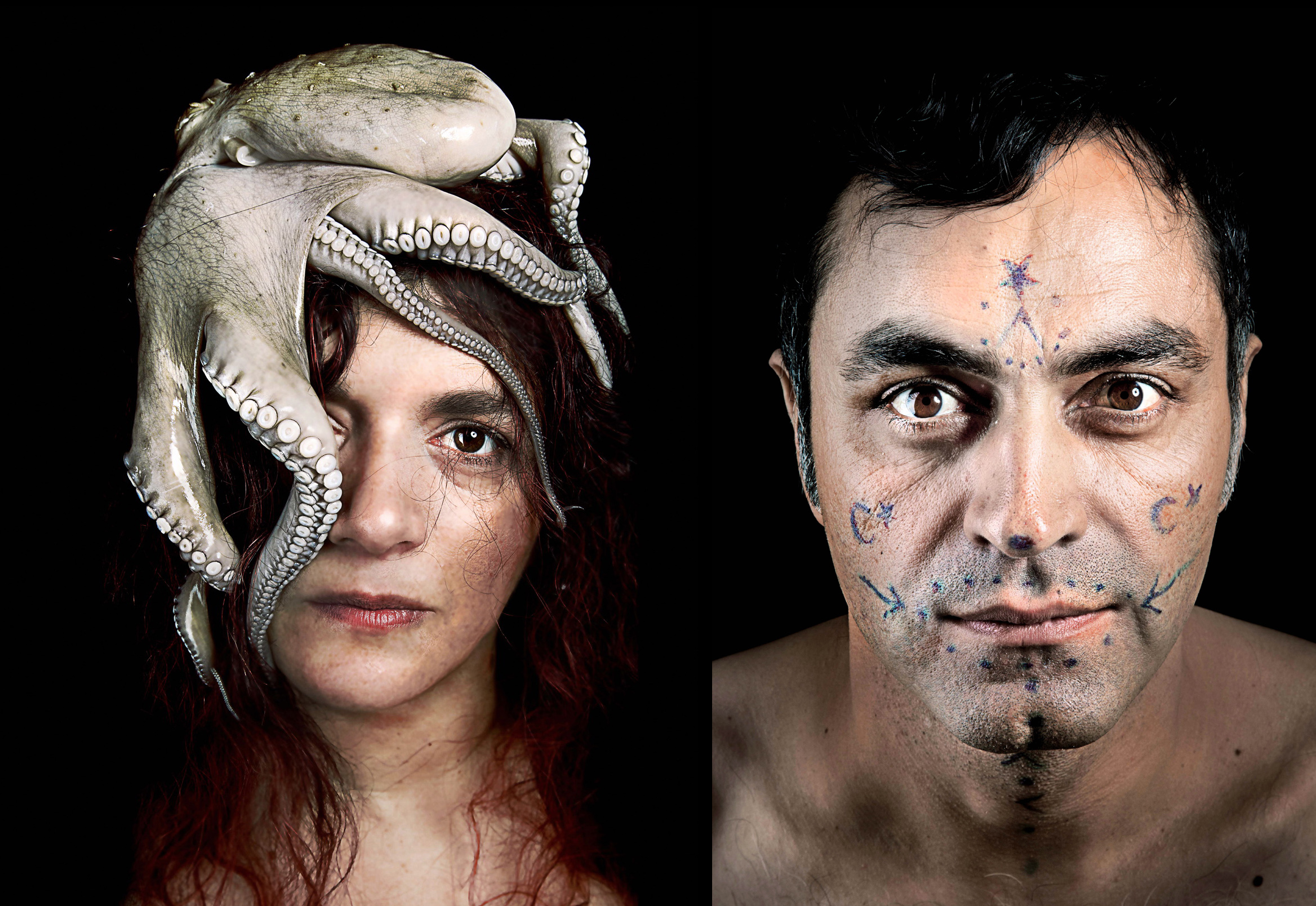